Hello guys, how are you? Welcome back to IBR headquarters once again! It’s a pleasure to chat with you again!
MIKE: Ciao bello, thanks for having us back. All is good here, hope things are great for you as well.

So, September 5 2012. It’s a very important date to me. Well, being that you guys are such a hard-working band, this day doesn’t make a lot of sense to you but actually it was the date of the first show I booked (together with my buddy Ame) since I moved to Milan. IBR wasn’t a thing at the time but I clearly remember everything and that show really pushed me to start doing something (that I hoped would be cool) in Milan. Do you remember that show/weekend we spent together?
MIKE: Of course, I remember, we were with our Chinese bassplayer Zhong at the time and it was one of the first shows of a month-long tour. It was at Ligera and you got us some great pasta, from your mom or grandma if I’m not mistaken. You did a great job there and were a gracious host. Your apartment was lovely too. Do you still live there?  There was this abandoned building next door, which our GPS told us was actually your place (haha). I’m happy it wasn’t! 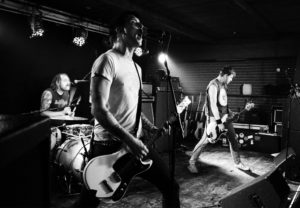 Yes, I still live there but the abandoned building is now destroyed!ahahah! So 8 years later, and after thousands of shows, what has changed for DeeCracks? (Don’t say bass-players! 🙂 )
MATT: Not very much really, We all have gotten a little older but I’d like to say the attitude hasn’t changed.

In Addition to DeeCracks, you all have different side-projects (Matt with Ratcliffs & Jagger Holly) (Mike … I can’t count how many bands that you play with) how do you manage to keep up with all of those different obligations? Also, a bit of news over the past few days. It was announced that Mike will play the drums at Punk Rock Raduno for the Mopes, how did this amazing opportunity come about?
MIKE: Yeah, it’s so awesome! I can’t wait for that show! I’m really excited for it. Basically Jughead texted me to see if I could play at Punk Rock Raduno with Mopes and of course I said yes. Jughead teamed up with us and Will from Zatopeks to do a special Screeching Weasel/Mopes/Even in Blackouts set at our Sweet Sixteen Festival last September, so I guess, he must have liked the way I played there. I’m super happy about it! I’m always grateful when someone approaches me to fill in or play in a band with them, it’s always an honour and it fills my heart that people dig my drumming, after all, it’s my happy place.

Let’s talk about Punk Rock Raduno. It’s not the biggest festival, but I’m pretty sure it’s one of the most beloved festival in the world. Being that you played/attended at every edition, what are your feelings about the festival? And what do you think is the secret behind the success of the festival?
MATT: Hm… well if you are looking at Europe during springtime and summer you might have noticed there’s a ton of festivals going on! If you ask me, there’s way too many. 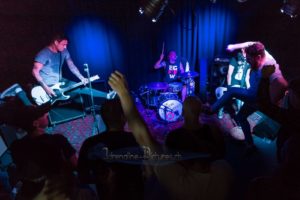 Every now and then we are playing some of them but I have to say I don’t really like it. It’s just very unpersonal and stressful. Raduno feels a bit different though. It feels more like a family reunion, you know? Everybody’s there for the same cause! Bands and fans! It’s like amongst all of those parties there’s one just for us!

It’s pretty well-known that way back in 2013, you were banned from USA. I don’t wanna go back to that infamous story but is the ban permanent or are you working on finding a solution to be able to go back to USA?
MIKE: Yeah, it’s a never-ending story really. As of now we are still banned, but we are still trying to make it back there one day. Never say never! Maybe once Matt will write a worldwide sensational big hit song, we’ll make it (haha).

Although this sad story might have demoralized a touring band, you rolled up your sleeves and toured everywhere possible. We’re talking Russia, Israel, China, Mexico, Turkey, just to name a few, most of which are not really conventional destinations for punk rock bands. What can you tell us about the punk rock scene in those countries? Leather jackets and ripped blue jeans?
MATT: Our main goal has always been getting around as much as possible. We hardly ever turn down offers, especially when it’s about shows or tours abroad. The cool thing about punk rock is that it connects the people all over the world. Scenes are the same everywhere.
Of course there are cultural differences In different places. Like for example Japanese bands practice hard until they reach perfection, while we don’t (haha). And by the way, no one should be “demoralized” because they got kicked out of the USA. 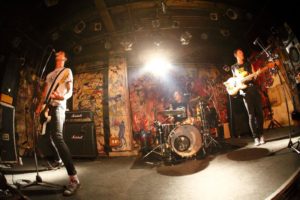 Last summer you guys did a great tour with the legendary CJ Ramone. How it was? What can you tell us about CJ? How is CJ behind the curtain? Any funny stories you would like to share with us?
MATT: We like to remember it as the ‘No AC Tour‘. It was kinda hard because last summer was brutally hot… But every show was great! It was professional to a certain degree (which we aren’t really used to), but the atmosphere was super relaxed! CJ is a great guy and really down to earth and yet absolutely aware of how big of a impact the Ramones were on thousands and thousands of people (was and still are) We were really grateful that he chose us to support him on his (final???) Euro tour. And yes, there are some funny stories but I don’t think I wanna share them here (haha). 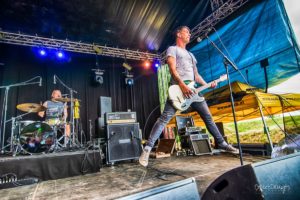 Let’s talk about records, Sonic Delusions is your latest full length album and two years later, are you satisfied with the final result? What is the general feedback or opinions that you got from friends and fans? What’s it like being on a major label now?
MIKE: Yeah man, it’s been great. Our fans really seemed to enjoy it and thanks to Pirates Press Records we found some new listeners, that we hadn’t reached before. I wouldn’t do anything differently with it really, maybe the artwork wasn’t our strongest, but that’s a matter of taste. We wanted to stick out and be different then the other bands on PPR, not only sound wise. So, it was all good. It’s not a major label though, it’s a very ambitious punk rock indie label that’s turning the right screws. We’re really happy to be a part of it and thankful for the opportunity. We like the fact that we got a special place in their hearts also, as we are a little different. Pirates Press and DeeCracks is not an obvious fit, but they took a chance on us and we took a chance on them, and we both thrived with our matching work ethics, vision and spirit. So, in my mind, it’s perfect.

For your upcoming italian tour you will release a new 7″ “…Can’t Get It Right” through Striped Records and Bad Man Records which has two brand new songs and two songs that were previously released on compilations. What can you tell us about it? I had the chance to listen to them ahead of time (thanks for doing that!!!) and I can say it’s another solid release in your discography!
MATT: Well the “new” songs are actually taken from the 2017 Sonic Delusions session. We always record extra material for 7″s, compilations and so on. (well I guess every band does that…), “Killed by Death” was featured on the Mom’s Basement‘s HEAD tribute compilation and then there’s a newly recorded version of the song ‘Caroline’ (the original one was part of the OCW 30 seconds songs compilation). We are really happy to have Striped with us for this one since they always did a great job taking care of our merch!

Whats next for you guys after the Italian Tour? New album? Big tour in the farest corners of the world?
MIKE: You know us, there is no stopping us from hangover hoppin’ all around the world. We’ll be hitting the road again in April around Europe, mostly Gemany, Austria and bella Italia. In May we will record a new album, Pirates Press is gonna release it once it’s ready. So we’re looking forward to that. We will be touring in France and Spain in fall and we’ll do Japan again sometime in 2021. That’s all, more definite plans will come once the new record is ready, so stay tuned.

Before letting you go, this is your chance to say what you want to say and ask me a question!! It’s always a big pleasure to talk to you, see you at NoReason Fest!
MIKE: Andrea, thanks again for the interview. Hope you enjoyed it as much as we did. But what can I ask you? Hmmm… Can I just ask you to just keep up the good work? Keep booking and playing shows, keep IBR and your bands alive, help shape and build the Italian punk rock scene and bring it to the rest of the globe… just keep your heart out there and keep being you. Can you do that for me?

Oh sure, Mike! I will never give up my friend!

Special Thanks Goes To John Proffitt Jr. for editing the interview

I BUY RECORDS IS PROUD TO PRESENT FOR THE FIRST TIME IN EUROPE:

The Ottawa trio needs no introduction: without a shadow of a doubt for 20 years now, they represent one of the most interesting bands to come out of the thriving Canadian punk rock scene. Their beginnings were characterized by a sound attributable to the classic 3-chord ‘Ramonesian’ school. The band over the years has broken the patterns, veering towards a more sophisticated sound, dark and fascinating, and accompanied by songwriting that is, to say the least, brilliant. The Creeps had accustomed us to dark and fast songs, but with Beneath The Pines, the guys wanted to surprise everyone once again, mixing up the cards, and giving us a different, more mature, and innovative album. It inspires empathy, awe, and universal anguish – but at the end of the tunnel it’s possible to see a light that shines. An absolute masterpiece of 2018.

On tour with the Creeps will be Ratbones, a punk rock band belonging to the I Buy Records’ headquarters. Active since 2003, in recent years they have released a self-titled album, produced by Mass Giorgini, and two EP 7″ released by I Buy Records, in collaboration with Monster Zero.

Among their interests, they list The Ramones … and only The Ramones. So you know what to expect! 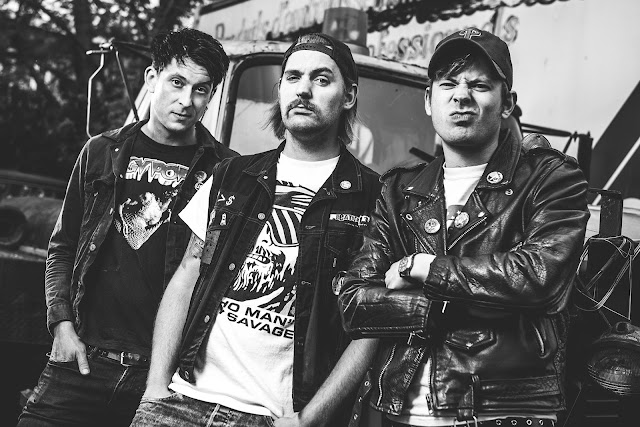