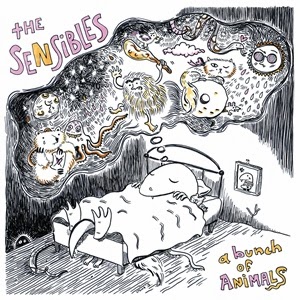 Recorded and mixed at Tup Studio by Bruno Barcella , the record thanks
by Rijapov Records will be available in both CD and vinyl , starting
from 12 October to coincide with the release party ( all the details
here).

Graphics and layout have been made by Stella, lead singer of the band:
in the cover there is Dino, mascot of the band, who dreams about so many
funny animals .. definitely a recurring theme in the disc. Ok let’s
talk a little about music.

Over the years, The Sensibles have developed and perfected their own sound ,
clearly inspired by the powerpop/bubblegum/modern rock sound but not
disdaining the ’60s vibe, fortunately without those hateful keyboards ,
which make me nervous after 15 seconds.

I can think of bands like Muffs, Yum Yums, Rezillos and why not also
Twistaroos … and A Bunch Of Animals ranges in these territories : 12
pieces always under 3 minutes for half an hour of music immediate,
carefree and especially fun: practically perfect formula to conquer
myself.

Tracks like Happy, I’m A Brat , Silly Song, Dear Otzi ( I had the honor
to make an appearance as a perfect geek in the video that should be
coming out soon) , I Want Your Blood – for me the best track of the disc
– came into my head with a disarming simplicity after a couple of plays
! The songs I just mentioned, not surprisingly, are among those who
have a greater thrust and in my opinion represent the real strength of
the band.
If you are looking for about half an hour of good music, my advice is to
contact the band or Rijapov Records and procure this album. 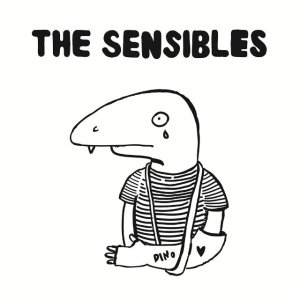 When we talk about a 7” that is self released with simplicity, as
far as I’m concerned, you ALWAYS have to appreciate that effort
regardless of the outcome. Fortunately, with The Sensibles, it goes
further: the DIY spirit of this production is without a doubt a touch of
class in this release but there is also a lot of quality for a band
that is now well oiled, active since 2009 and appreciate that they are
doing this lately also outside of Italy. After a good amount of playing
live around the North of Italy in previous years, 2012 was, without
doubt, an important year for the band: change of line-up on guitar and
on drums, a nice tour of the U.S. and first official release of which I
am going to talk about. Recorded at CB Studio in May 2012 and mixed at Tup Studio, the month of July saw the official publication of the disc,
with an initial print run of 300 hand-numbered copies.Layout and
graphics were edited by Stella, who is the singer of the band (check out
her blog!) with the help of Raffaele and Claudia Carrieri. The photos of
the four “Sensibles”, inside the liner notes, were taken by Laura
Donati. The tracks on this record fully express the sound that the band
plays during their gigs that i have been able to appreciate in person
many times (here’s a live report): punk-rock tinged with power-pop but
luckly has nothing to do with that terrible revivial which seems to be
in vogue lately. Having to venture a comparison I would say that they
remind me of The Muffs, but also of the fancy Japanese Shonen Knife.This
is an record that I listened to so much and with pleasure.Personally I
like it more when bands definitely push on the accelerator, so it is no
coincidence that my favorites are Open Book and Denny, opening tracks
of both sides. While waiting for the first full length (2013 ?!), I
would recommend this 7”, and if you do not trust my opinion, you can
always give at least a listen to the record through their Bandcamp page,
you will hardly be disappointed.