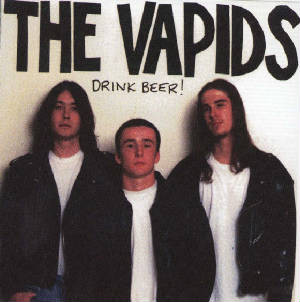 “He never understood my choice of tunes, that three chord junk.  So I lent him “Leave Home” for the weekend.  Monday, he came back a punk.  Mikey was a punk.”  The Vapids are a punk band from Burlington, Ontario originally.  They started jamming out as a four piece in the early nineties and by 1994 were recording their first demo releases.  Mikey was the original fourth member on guitar who left for college and dropped out of the band.  The song, Mikey Was A Punk, is about him.  Drink Beer! was their second full length release in 1996 with Cracked Records out of Winnipeg, Manitoba.