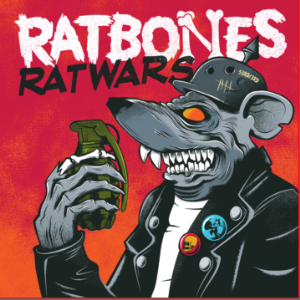 Ratbones are a punk-rock trio based between Genova and Milan heavily influenced by Ramones. The band released in 2013 a self-titled full length for Making Believe Records, 13 tracks of fast and pure ramonescore, mixed and mastered by the mighty Mass Giorgini. After many line-up changes during the years, the band found the stability in 2013 when Andre joined the band as bass player. After serveral shows around Italy with the new line-up, during the late 2014 the band recorded with Alex Bounty from The Veterans 4 songs for a new EP “Ratwars” released 2nd October 2015 by I Buy Records and distributed by Monster Zero Records.