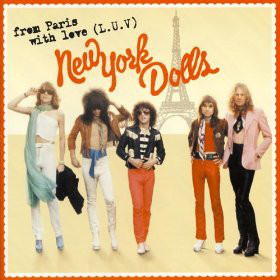 They came from the outer limits of New York City, turned up their amps to 11, and gave a moribund Manhattan music scene its first great rock ‘n’ roll band since the VELVET UNDERGROUND. THE DOLLS were hardly played on the radio in their time but no band (save the STOOGES, perhaps) exerted a greater influence on early punk rock. The first European release for this 12-track set was recorded for Radio Luxembourg and originally released by Red Star Records. When firing on all cylinders, as in this set, THE DOLLS were great. It’s a little over the top in spots but it just wouldn’t be THE DOLLS if Thunders didn’t bellow his backing vocals all over Johansen’s lead while Sylvain delivered the occasional duff chord. This live album captures Johansen, Thunders, Sylvain, Kane and Nolan at their peak. The percussive thrash and mangled vocals of Personality Crisis, Pills and Vietnamese Baby show how they were the obvious prototype for the SEX PISTOLS and a thousand other punk acts. Double LP!!!