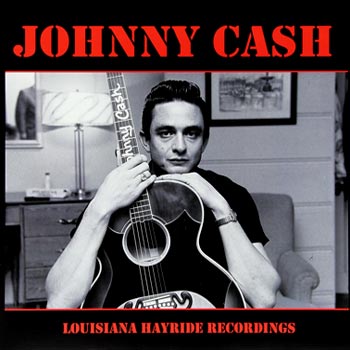 Johnny Cash’s distinctive voice and vision cut across the boundaries of country, folk, blues, and rock and his huge body of work is as singular and American as any in popular music. Shortly after the release of his first single (“Cry! Cry! Cry!” b/w “Hey, Porter”) in 1955, Cash made his first appearance on the Louisiana Hayride radio show, then one of the most popular shows in the south. Accompanied by the Tennessee Two (lead guitarist Luther Perkins and bassist Marshall Grant) and his own rudimentary, percussive rhythm guitar, Cash quickly became a star, debuting his first huge hit on the Hayride, “I Walk the Line.” He returned in 1959, and again in 1962 and 1963, and this collection features live highlights from his various stints on the show. Cash was often at his best in front of an audience, where his natural sincerity and goofy blue-collar humor combined with the lean, stripped-down, versatile sound of the Tennessee Two to deliver sets of easy intimacy. Live Recordings from the Louisiana Hayride plays like a concert, with chugging versions of “Big River,” “Five Feet High and Rising,” and “Folsom Prison Blues,” a poetry recitation (of Edna St. Vincent Millay’s “Ballad of the Harp Weaver”), and a humorous introduction to “I Got Stripes.” Also included is an apparently unscripted commercial for Southern Maid Doughnuts, illustrating the often loose structure of these historic radio shows.