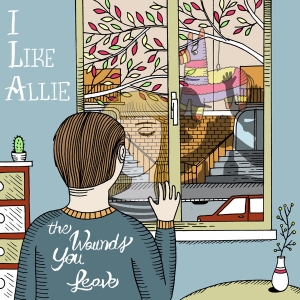 Released by your truly at I Buy Records in collaboration with Lonely Raven and Neat is Murder, the debut album of I Like Allie is a little gem. Higly Recommended for all the lovers of emo/punkrock/indie. Single side LP in black wax.

Streaming:
<a href=”http://ibuyrecords.bandcamp.com/album/ibr003-the-wounds-you-leave”>IBR003 – The Wounds You Leave by I Like Allie</a>

IBR003 – The Wounds You Leave by I Like Allie

I Like Allie started out initially as Renato Treves’ acoustic project. During this phase, he played many shows with artists such as Joe McMahon and Rocky Votolato. However, it became immediately clear that his songs were meant to be played loud. This is why in Fall 2014, I Like Allie became a band. Gio, Fra and Sandro joined I Like Allie, enriching its sound through the musical background acquired while playing in other bands such as Monumental, Teenage Gluesniffers and Low Dérive. The band spent 2015 in a practice space reworking songs and writing new ones. In February 2016 , the band entered the studio to record their first EP, “The Wounds You Leave”. The EP is a mix of punk rock and emo, but with a very personal style deriving from the band member’s different musical tastes. To promote the release of the record and to get I Like Allie’s name out there, the band can’t wait to hit the road and tour Italy, Europe, the UK, and North America. Expect more to come from I Like Allie because they have no intention of standing still.