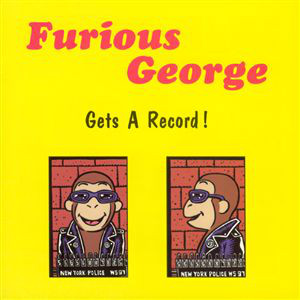 Furious George – Gets A Record!

A well-named band whose namesake, George Tabb, doesn’t just love his favorite band, the Ramones, he tried out for them on bass a few years after C.J. left, and almost got the job. What to do instead? Form bands that borrow the ethics of your fave without being a tribute – New York’s Furious George is his latest one. On the trio’s Gets a Record (also a reference to the famous Curious George monkey, pictured on the sleeve with a leather jacket and cool shades), Joey Ramone himself is a guest on “I Am Gilligan”