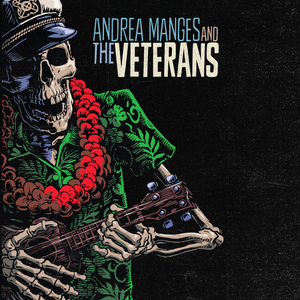 Andrea Manges And The Veterans – ST

Andrea, lead singer of The Manges, started The Veterans with his buddy, producer and guitarist Alex Bounty, in 2006. Since then, The Veterans released one s/t album (It’s Alive Records, USA, 2008) and three 7″ singles.
The original idea was to never play live shows and just record surf-inspired punk songs with guest musicians, but since a stable lineup formed, some party shows were performed in Italy.
Andrea and Veterans drummer Lorenzo (The Ponches) started to write songs together for a new album. During this process Andrea realized it was not just only a fun project but also a record with identity and vibes that was more fit to become his first solo release. The band changed name in “Andrea Manges And The Veterans” and this is not only the following of the Veterans saga, but a fresh start for this Euro punk rock all-star band. Ally from Teenage Bubblegums on bass, Lorenzo (The Ponches) on drums, Stefan Eno (Popsters, Semprefreski, Tough) on guitar, Max (The Innocent) on guitar… and of course, producer Alex Bounty.