Hey Hey! IBR is not dead, I’m just working hard behind the scenes. I’m basically too busy with work and personal life to update the website, but IBR is still alive and I’m pushing very hard to back on tracks with all the plans I had just before the pandemic.

I’m also ready to announce a very nice tour that we had to postpone twice for obvious reason. It seems like we’re slowly going back to our lives, but damn, let’s stay careful.

Anyway, we have not one, not two, not three but 4 fucking releases coming out this month! I’m very happy to have been involved with these bands as they truly represent the meaning of two simply words: P-U-N-K R-O-C-K.

First album comes from my band Ratbones (follow in case you don’t!) and it’s called Teenage Confusion and Adult delusion. We really worked very hard and I hope you guys are gonna like it. It’s gonna be released together with the help of the mighty Mom’s Basement Records. Bandcamp/CD release day is May 20. Unfortunately, the vinyl release is a little postponed but it should be ready around late June. I’m gonna setup a preorder very soon so you can get it as soon as it’s available. Can’t wait, amigos! 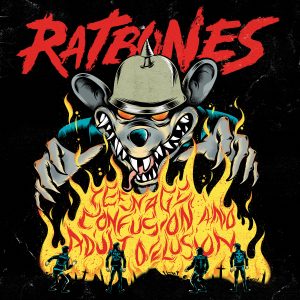 More details are coming from the other 3 releases, just stay tuned. In the meanwhile, two more albums are available from the worst store on the web (click here):

I’ll try to update the website as much as possible, but I won’t make any promise. If you wanna get in touch, just reach me through the social media where I’m a little more active.